The Tibetan Book of the Dead has inspired the new performance of Malomudvar Színházi Műhely. If they go see it, a lot of people will regret it, because it will be frightening and incomprehensible for them, just as other people’s death is, or their own unavoidable death in their life. >>

Theater of the Body – Book of the Dead
Original Hungarian language version by ’littledevil’ appeared on www.journality.hu on April 2, 2013.

Malomudvar Színházi Műhely is one of those places in Budapest, where many small theatre company go on the boards with experimental productions. The physical theatre performance, titled Book of the Dead came to be from inspiration by the Tibetan Book of the Dead. >>

I should die...
Original Hungarian language version by ’B.D.’, appeared on www.kulturprojekt.hu on July 9, 2013.

Csaba Formanek, Lénárd Ilyés and Ádám Pignitzky created a performance in the international language of physical theatre, titled Book of the Dead.

The myth of change would intertwine our whole life, if we’d let it. Even so, we hold on to the ordinary, cling to our masks stuck on us, going through the same motions for the thousandth time. In clear moments perhaps we feel that life is more than the role we play at the moment. And, whether we like it or not, by all means eventually we’ll put down this role. That is the mystery in the Tibetan Book of the Dead, which is chosen for the guideline of the performance by the creators. >>

Book of the Dead – Seance at Super8
Original Hungarian language version appeared on the Facebook-page of Kilátó(www.facebook.com/dakiniland.kilato) on July 3, 2013.

Summer evening. We arrive. Funny place. A semi-open tent, made of yellowish white plastic on the court. Tables, rejected airplane seats and benches beneath that. The audience is greeted by a band composed of young people. Two chellos, a guitar, drums and songs – in english. We are in Budapest, but we could be anywhere, in any big city of the world. We are struck by the smell of boundless youth and liberty. >>

Stories of the Dead
Original Hungarian language version by Zoltán Boldog, appeared on www.irodalmijelen.hu on July 23, 2013, as part of an exposé on THEALTER Festival.

By definition, physical theatre builds upon the actor’s body and motions instead of words. When we watch the performance made from the Tibetan Book of the Dead, which counts itself in the former category, we can be witnesses to the translation between writing and motion. But that’s just raising a hypotethical question, since the production of Csaba Formanek, Lénárd Ilyés and Ádám Pignitzky throws in our faces the issues of dying, with the help of three stories. >>

Although the title hints at the Tibetan Book of the Dead, as the creators point it out in the subhead (Physical theatre performance inspired by the Tibetan Book of the Dead), that work was just a starting point. Truly, this Book of the Dead isn’t exclusively nor principally about death. Or if it is, it’s that in a much broader sense, than we usually think about it. It’s much more about the circle of life, the shifting of the phases of life, about the constant leave-taking and arriving which fills our lives. Anyway, it’s such a performance, that you can’t really say, that it’s about something overall, because individually it is more than usually affected by in which life-phase the viewer is in, what kinds of goodbyes or encounters are past or before them, or how close are they feeling themselves to this (almost) wordless, deliberately slow and meditative physical theatre. >>

They whip out the head of the ostrich
Original Hungarian version appeared on hir6.hu by Sarolta Tari on July 26, 2013. as part of an exposé on THEALTER Festival.

The title itself induces expectations in the viewer, since the subject of death is something, that leaves nobody untouched. Furthermore, if they mention the Tibetan Book of the Dead in the proposal, our excitement is hightened. >>

The performance by the trio of creators Csaba Formanek, Lénárd Ilyés and Ádám Pignitzky, inspired by the Tibetan Book of the Dead is shown at a new venue, at the Super8 basement in the eighth district. The play, starting out from Malomudvar Színházi Műhely has been to Inárcs, the Thealter Festival in Szeged, and in September, it will return to its adopting place in Kőfaragó utca. >> 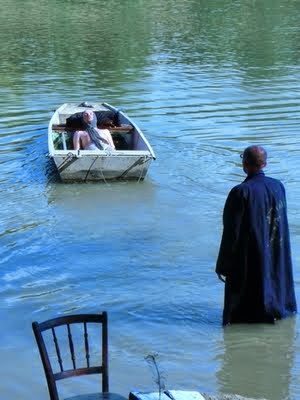 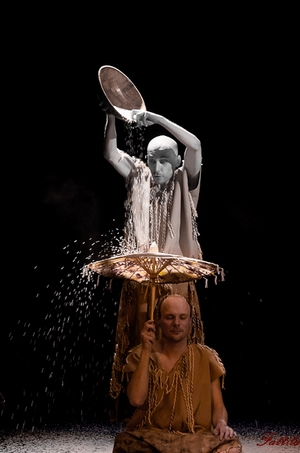 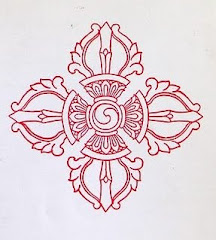